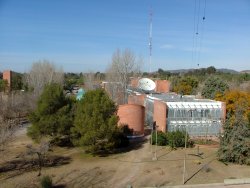 IADIZA’s mission is to conduct research to improve scientific understanding and management practices needed to achive sustainable use of arid ecosystems, particularly in central-western Argentina.

The environment of the location

IADIZA is located at the CONICET Science and Technology Center in the beautiful General San Martín Park in Mendoza city (32° 52′ S, 68° 51′ W). Besides IADIZA, the CONICET Center harbors other institutes encompassing a diverse set of disciplines including geology, dendrochronology, glaciology and nivology of the high Andes, experimental biology and medicine and humanities. Mendoza city, the capital of Mendoza province, lays at 750 m a.s.l., at the western edge of the temperate Monte Desert biome and at the foothills of the Andes. The climate is arid to semi-arid, with ca. 250 mm of mean annual rainfall occurring mostly during the summer.

IADIZA was created in November 1972 by an agreement between the National Council for Scientific and Technological Research (CONICET), the National University of Cuyo and the Government of Mendoza Province. It was founded on the basis of the former Provincial Institute of Arid and Semi-arid Zone Research.

The staff at IADIZA is composed by a diverse group of doctoral and post-doctoral fellows, staff researchers and technicians. Doctoral students are affiliated with graduate programs at the National University of Cuyo and other universities in Argentina and abroad. Many staff researchers have joint appointments at local academic institutions, including the Faculty of Agronomy and the Institute of Basic Sciences of the National University of Cuyo.

Currently, the institute is organized in nine research groups:

In addition, the institute manages two natural areas, the Man and Biosphere (MaB) Reserve of Ñacuñán and El Divisadero Experimental Station. IADIZA also harbors scientific biological collections including an herbarium, vertebrate and insect collections and a germoplasm bank, and runs a program on Environmental Education as an outreach activity for the local community.

Manage Cookie Consent
To provide the best experiences, we use technologies like cookies to store and/or access device information. Consenting to these technologies will allow us to process data such as browsing behaviour or unique IDs on this site. Not consenting or withdrawing consent, may adversely affect certain features and functions.
Manage options Manage services Manage vendors Read more about these purposes
View preferences
{title} {title} {title}