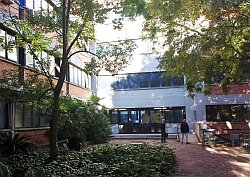 Desertification Research Centre
(Nucleo di Ricerca sulla Desertificazione – NRD)
Università degli Studi di Sassari
Viale Italia, 39
07100 Sassari – ItalyWeblink: http://www.uniss.it/nrd
Mission statement
The Desertification Research Centre (Nucleo di Ricerca sulla Desertificazione – NRD) is an interdepartmental center of the University of Sassari that promotes interdisciplinary research and international cooperation projects on desertification, environmental degradation and sustainable land and water management at international level with a specific focus on drylands. In this context, NRD also acts as a research partner and facilitates networking among researchers and institutions.
The environment of the location
The NRD Centre is located in Sassari, Sardinia (Italy). The geographical position of the island and the Mediterranean climate (aridity index 0.5; with deep water deficit in the hot dry summers and water surplus in the wet and mild winter) offer a great variety of habitats, land uses, environmental and socio-economic contexts for studying land degradation and desertification issues at stake in the Mediterranean basin. However, NRD also runs research and international cooperation projects located in Africa (north, west and central regions), south America, Asia and other regions in Italy.
Short profile of the Desertification Research Centre
The NRD Centre started its activities in the early ’90s as a multidisciplinary research group focusing on the impact of agropastoralism on land degradation in Mediterranean areas. In 2000 it was institutionalized as an Interdepartmental Centre of the University of Sassari.
NRD currently involves researchers from the University of Sassari focusing on physical, biological and socio-economic aspects of desertification, with particular reference to farming and livestock framed as socio-agro-ecological systems, soil and water resources management, renewable energy facilities, rural development and adaptive management under uncertainty. Investigations are carried out through systemic and participatory approaches in the framework of national and international research projects funded by EU, National governments, Autonomous Region of Sardinia, international public and private organizations. Networking and training activites are also part of NRD mission, to support the exchange of data and experiences at the international level and to promote scientific training of young researchers.
Structure

NRD is composed of some 40 senior researchers from eight Departments of the University of Sassari, who provide expertise and scientific support to the varied activities of the Centre. They form the General Assembly that elects the NRD Director, the Executive Board and proposes the members of the Scientific Board to the Academic Senate for approval.

The Centre is headed by the Directory, which is elected by the General Assembly every three years. The Director promotes NRD activities in agreement with the University statute and regulations, keeps relations will all academic bodies and coordinates the NRD staff. In agreement with the Scientific and Executive Boards, the Director proposes the annual plan of research and promotes research agreements with University Departments and with other national and international scientific institutions.

The Scientific Committee supports the general planning of NRD scientific activities and carries out internal audits; it also promotes and develops national and international networking.

The general administrative planning and management of NRD is in charge to the Executive Board that takes decisions on the administration of NRD financial resources, the recruitment of staff members and the proposal/approval of agreements of scientific collaboration with scientific institutions.

The Staff is organized in three functional areas: Scientific and Technical staff, Financial Management and Secretariat, Communication and External Relations. It is composed by MSc graduated people; most of the technical Staff members are post-doc or PhD students with skills including agronomy, hydrogeology, remote sensing, biodiversity, sociology, environmental engineering and agricultural economy.

Manage Cookie Consent
To provide the best experiences, we use technologies like cookies to store and/or access device information. Consenting to these technologies will allow us to process data such as browsing behaviour or unique IDs on this site. Not consenting or withdrawing consent, may adversely affect certain features and functions.
Manage options Manage services Manage vendors Read more about these purposes
View preferences
{title} {title} {title}